Being a podcast host is a lot of work. From the prep work to the interview, production, and promotion, it takes a mountain of effort to make your show happen. That’s why having the wrong podcast guests can be such a burden. One of those burdens is particularly troublesome; I’m talking about the Publicity Vampire.

These guests are there to suck the life out of the interview, the show, and you. They are the guests you instantly regret having on your show within minutes of introducing them. The resulting interview is painful to get through, and it will show in the quality of the episode. Then you have the gargantuan task of promoting these monsters, yet another headache. Every host probably has at least a few of these stories.

To help you avoid these mistakes, here’s a list of the top ways to keep these bloodsuckers off your show. By following these rules, you will find the guests that made you want to start your show in the first place. While it may be a lost cause to try teaching some people manners, many just need a little kick. Being proactive ensures that the host has done everything they can to be a true angel.

1. Go for the Win-Win Opportunities

The best business relationships aren’t the ones that feel like a fight. Especially in podcasting, the guest and the host need to work together towards the common goal of providing value to and entertaining the audience. This works best when both people are looking to add as much as they can to the conversation and give instead of taking.

Thinking win-win is a powerful habit that gets both parties into an empathetic state of mind. Increasing empathy has been shown to increase well being, social connections, and prosocial behavior. During a podcast, those are the exact traits a host is looking for. It’s more entertaining when the host and their guest have a connection.

On-air chemistry isn’t something that you can easily fake. The audience has a keen eye for the small non-verbal ticks that give away how we think and feel. A listener will be more invested in the episode if they feel like they connect with the participants.

An Angel Host will know to communicate this upfront, and the potential podcast guest will know what is expected of them and won’t be looking to approach it as the host’s adversary but their partner. Tell the guest what they should expect to gain from being on the show. Let them know how this will benefit the host, too.

The many potential vampires aren’t trying to sabotage the host on purpose. They simply haven’t given the other side much thought. People like to think that they are empathetic, but there is often a huge deficit.

One study looking at how empathetic businesses discovered the 80:8 rule. They found that while 80% of organizations believed that they delivered the best customer experience, only 8% of customers agreed. We often have the best intentions, but that doesn’t mean we show it.

The podcast guest needs to understand that the episode will result in content that they can use too. If the host is using something like OMH Agency’s Podcast Ignition System, then they should be informed that there will be more than 41 pieces of content pushed out to every corner of the internet from the host, and the guest will receive their own branded video to use for their promotion.

Sometimes doing a show together is a stepping stone for a larger business relationship. If this is the case, then the host needs to disclose that interest at the end of the interview. After they are off the air, they can see if it makes sense to explore working together in a larger capacity. It’s not something that will work with every guest, and it’s not something that needs to come out of every episode for a show to be successful.

2. Prepare and Empower Your Interview Guest to Succeed

The guest needs to know beforehand how the show is going to work. They should know that the show isn’t heavily edited. They need to know that after it is recorded, the audio will be touched up, and a few pieces may be cut, but that is about it.

A Hero Podcast Guest should be familiar with the basics of recording like:

The guest should get a packet that is filled with a list of tactics to make them sound good during the interview. They need guidance on how to set things up so that they will sound good and communicate all of the insight that they intend to share with the show.

As a seasoned host, it is easy to forget that not everybody knows how to get quality recordings.

They also need to have a good idea of what they will be discussing on the show. There should be some room for spontaneity, but they should also have the chance to prepare. It’s easy to remember the big stuff, but it’s just as important to clue them into some of the more personal questions. When asking for advice or a favorite book, putting them on the spot will likely start with stumbling and end in a disappointing generic answer.

The guest needs to have ample heads up about the interview. Leading up to it, they need clear communication using both email and text about the time and place that they are expected to show up. If the host has the opportunity, giving them a call isn’t a bad idea either.

Social media is a helpful additional channel to connect with a podcast guest to cover all the bases. Focusing on how you are looking forward to their interview reminds them of their commitments without sounding pushy.

If the show is going to take place during an online meeting, the guest needs access to the link multiple times as the date gets closer so that it’s easy and convenient for them to be at the right place at the right time.

They need to be exposed to the reminder several times to be sure that it takes hold. Just like it takes consumers multiple exposures to an ad for it to start influencing them, the podcast guest needs multiple follow-ups. The minimum should be three reminders to give them no excuse for not showing up.

Setting a reminder in a calendar when it’s time to reach out or scheduling the emails to send at a certain time are good ways to get the word out.

Always thank them in advance for coming on the show. Be the first person to reach out and offer help. It’s a nice gesture, and it pulls them along towards a successful show using the law of reciprocity. When you do something nice for them, people feel strongly compelled to reciprocate the gesture.

4. Pave the Way for Your Podcast Guest to Make the Right Pitch

After the show has started recording is not the time to find out what the podcast guest wants to promote. The host is responsible for everything they put on their show. While it is part of the quid-pro-quo of producing a show that the podcast guest will be promoting something, they need to be sure they are doing it in the best way.

The podcast guest should know to prepare ahead of time, having a relevant link ready for them to share more of what they are doing. Allow them to give the audience something to engage with later. They should know that they will get their opportunity to plug their stuff, so there isn’t any need to put a plug into every answer they give.

Having several calls to action prepared will give them the confidence that they aren’t doing the show for nothing. If they are thought out ahead of time, each plea will also be optimized to be as effective as possible.

Then they can relax and focus more on the interview. They also won’t be as tempted to talk about their offer at every turn if they know that there are several places that they can sprinkle them in.

The guest needs to understand that the goal of the show is to have a conversation. The mutual exchange of ideas is the reason for the season, and they need to realize this. The audience needs to receive as much value as possible for investing their time into listening to the show.

5. Make it Easy for Your Guests to Promote Your Show to Their Audience

Again, before the recording date, the guest should see a list of ways to promote the show to their audience. The host will get better results by giving the podcast guest this ahead of time and allowing them to see the possibilities for them to share the show with their people. 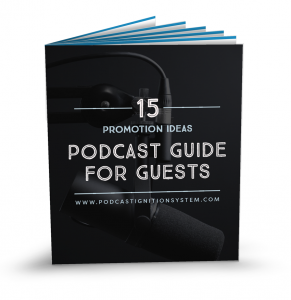 By thinking ahead and developing a Podcast Promotion Guide for Guests, the host will have something to provide to each guest that takes very little time and communicates with the guest why they want to help out when it comes to promotion.

A call to action that is aligned with the benefit of the product or service they are promoting will perform better than one with generic wording. Phrases like ‘Buy now’ or ‘try me’ are too general to be compelling. Making them time-sensitive puts a clock and pushes the audience towards taking action right away.

Offer the audience instant gratification. The audience doesn’t want to wait to begin with, but the more time that passes between after an offer, the less tempting it becomes. Not to mention that it’s what the audience expects.

The podcast guest should do what they can to make the audience curious. That includes saying what they do and the results they get but being vague on specifics. Demonstrating refreshing points of view is one way to go. Saying something they didn’t expect is a good way to grab attention. Ask questions that intrigue the listener. If they want to know more, then they are more likely to take action.

While a tightly constructed call to action will increase the response that they get from doing a podcast, that effect pales in comparison to what they will get if they offer value first. Offering value is the entire point of the podcast. A sales pitch adds nothing, which is why they are so annoying to hosts.

One of the responsibilities of the host is to communicate that to the guest. They need to know that the best thing they can do for their brand is to provide the best information they can on the show. If they get that right, then most of the other details will fall away, and they will be well on their way to becoming a true Hero Guest.

By taking the time to identify red flags, hosts will be able to prevent Publicity Vampires from making it onto the show in the first place. Keeping bloodsuckers from sapping you of your energy ends up in a better show for less effort.

Keep in mind that some podcast guests will do these things unknowingly, so it becomes the responsibility of the host to communicate these things to them so that the guest will be able to adjust before the cameras start rolling.

By taking action, the host can make sure that the episode is a win-win. Set your podcast guests up with all of the tools they need and instruct them on how to properly use them so they will surely enjoy an amazing interview experience.